Maybe There Is No “Solution”
By Aryeh Green
[Plus ca change, as the French say.  It is extraordinary how little things change in this region.  A little over twenty five years ago I penned an op-ed in the Washington Jewish Week about President George H. W. Bush and James Baker's intention to "solve" the 100-year-long Arab rejection of Jews' claim to our homeland.   This was just at the start of the round of Palestinian violence that became known as the "first intifada".  With minor edits this is what was true 25 years ago... and frighteningly still holds true today.  Jared Kushner may be on to something… though he might learn a thing or two from history, rather than ignoring it.]

Once again attention is focused on our small strip of land on the Mediterranean.  Talk of various “peace initiatives” is in the air.  Despite the declaration by president Bush [I] that “the time has come to find a solution to the Arab-Israel conflict”, two realities of our Middle East predicament must be understood to prevent expectations from being overly optimist.

The history of violence in the region, and its role in political culture, may mean the dispute is not open to ‘peaceful’ resolution – however much it pains us to admit.  The intractable nature of the issues leaves little hope for an all-encompassing “solution” in the foreseeable future.

The violent ‘intifada’ [since December 1988] is not a frustrated escalation of non-violent earlier protests; it is a cultural phenomenon reflecting a prevailing attitude in the Arab world that problems can be solved primarily by force.  To say “violence is the only language Arabs understand” would be racist; it is merely accurate to note the frequency of violence in Arab communal and political life.

This obsession with violence explains the continued unwillingness of the Arabs to enter into negotiations with Israelis, whether in the famous “Three Nos” at Khartoum, in the PLO and other terrorist organizations’ insistence on what they call “armed struggle”, or in the current uprising and recurring bloodshed across the region.

Otherwise, one would expect this ‘uprising’ to give way to some articulation of grievances aside from the general demand for a ‘Palestinian’ state, and a willingness to compromise and work towards real peace.  Israel is still awaiting such an approach.  In the meantime, people are being stabbed and shot.

Given the events of the past few months, the western world might now recognize the Middle East is a hostile and violent region, instead of continuing to view matters according to western rules and values.  Political discourse here owes more to the Bedouin sword than to Jefferson’s (or Martin Luther King’s, or Gandhi’s) nonviolence and democratic moderation – whether Muslim vs Christian, Sunni vs Shiite, Arab vs Arab, or Arab vs Jew.

But understanding that here, war is not merely a means but an end in itself, is only one side of the coin.  It reflects the continued hostile rejection of the Jews’ connection to our ancestral homeland, and thus the legitimacy of Israel’s very existence.  The intractable nature of this ideological/religious approach virtually guarantees a continued stalemate, in what has become a civilizational conflict.

Three aspects of this historic struggle stand out.  First, the ‘Palestinians’ aspire to a state in “all of Palestine” (excluding Jordan).  Israelis across the political spectrum – even those who support Palestinian statehood – demand the Arabs renounce the goal of destroying Israel, and agree that the establishment of such a state, wherever located and however structured, will fulfill their national aspirations.

Yet even ‘moderate’ Arabs are unwilling to give up their dream of returning to Jaffa, Haifa and Lod.  In 1947, the Jews/Israelis agreed to Partition because, even though it was not what we wanted, we were willing to take what we could get.  This willingness to compromise is lacking in the Palestinian community and has always been the main weakness of the Arab attitude towards Israel.

Second, Israel cannot accommodate a fully armed entity, whether autonomous or federated with Jordan; the Palestinians decry this as a limitation of their sovereignty.  They insist that Jews/Israelis residing in the disputed territories of Judea & Samaria/the “west bank” must be evicted; Israelis insist some must remain.  And most realistic scenarios give Israel a right to maintain military installations in the territories, while this has already been denounced as unacceptable by Palestinian leaders.

And third, the status of Jerusalem continues to be disputed.  Arabs and Jews, Jordanians, Palestinians and Israelis all lay claim to the city.  No one has legal title to the eastern section of the city, including the “Holy Basin”, under international law.  Left undetermined by the UN, Jordan’s illegal occupation was never recognized over any of the territory west of the river, and most nations have not recognized Israel’s historic, legal or political claim to date.  Yet across the political spectrum in Israel, and in most western governments, it is agreed that Israel we will never surrender Jerusalem or the Old City; while Jordan, the Palestinians and the rest of the Arab world continually maintain that a “return” to Palestine without “Al Kuds” is unthinkable.

These three issues may perhaps be resolvable through negotiations.  Yet few people publicly acknowledge these and other difficult aspects of the conflict for fear of upsetting whatever ‘peace process’ may be in progress.  We should not delude ourselves.  Due to the passions and inflexibility involved, these disputes are likely to remain unsettled for some time.  [Jared Kushner’s statement should be welcomed precisely for its honesty and wisdom.]

This need not be depressing.  France and German were at war for centuries.  Our conflict is far too serious to be “solved” in a few weeks of shuttle diplomacy or a few years of one US administration or even a few decades of one generation.  Once the hatred cools over the course of generations, perhaps a power-sharing arrangement and cross-national residency can be arranged.  But that first step is the most crucial – a change in the decades of anti-Israel, anti-Jewish (anti-Christian and anti-western) culture of hatred in Palestinian society and the broader Arab and Muslim world.  Just as a European Community would have seemed ludicrous to an 18th Century Frenchman, until that occurs, discussing such “solutions” is unrealistic and counter-productive.
------------------
Aryeh Green is the author of the forthcoming book My Israel Trail: Finding Peace in the Land of Milk and Honey (www.myisraeltrail.com), a business executive and consultant, and was a senior advisor to minister Natan Sharansky in Israel’s Prime Minister’s office.

Popular posts from this blog

Passover is the Jewish people’s real independence day The Forward - April 10, 2020 By  Aryeh Green Aryeh Greene The author walks the trail. Standing on a mountaintop three days north of Eilat, I turned around for the first time. I looked back along the route I’d hiked, with its brown and gold hills and valleys, the shimmer of the Gulf of Eilat and the Red Sea in the distance. I was amazed at how far I’d come — and surprised that it all looked new to me. I’d climbed three different mountains, trudged some 35 miles, ascended and descended thousands of feet along the Israel National Trail, yet I couldn’t recognize any of it from my vantage point at the peak of Maale Amram, just south of Timna. In life, as in hiking, sometimes you have to stop, look back, appreciate how far you’ve come, and get a new perspective on where you have been. With most of us sheltering at home these days, it is a good time for this sort of reflection. For me, it has helped to revisit my
Read more 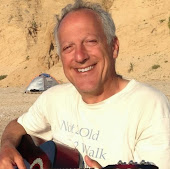 KOH Library & Cultural Center, Sacramento -- Israel Cultural Desk Presents: My Israel Trail: Finding Peace in the Promised Land Aryeh Green Inspiring and dynamic speaker and author Sunday, November 15, 2020 at 12 PM (PST) – on Zoom   Aryeh Green is the author of the book My Israel Trail about hiking the 700-mile Israel National Trail (“Shvil Yisrael”) and meeting personal challenges.   A well-known and popular speaker, Aryeh will share with us some reflections on his adventures on the Shvil and the lessons he learned on the hike. During his two-month solo trek across the land of Israel, winding through the Negev desert, the mountains of the Galil, the hills of Jerusalem and the beaches on the coast, Aryeh recovered from his devastating divorce and re-discovered his love for our country, the land and its people.   Aryeh offers an inspiring and uplifting story of pe
Read more
November 25, 2019

Aryeh
Miriam's husband; Yonatan, Michal & Moriyah's father. What more can be said of any importance? Maker of (fine - if I may say so) wine; business/marketing consultant; Chief Strategic Officer at EnergiyaGlobal; former advisor to Natan Sharansky; active in promotion of Palestinian and regional democracy; director emeritus of MediaCentral, a provider of services for foreign journalists based in or visiting Israel - see www.m-central.org.